Unfortunately, we live in a world in which car thieving is relatively common. It is no wonder that one of the main rules of parking your car is to not leave any visible valuables inside it, as that will make it a prime target for thieves.

Any expensive objects or bags should always be left hidden inside the boot, or under the car seats so that they can’t be seen through the window. Having your car broken into is one of the worst feelings, and one to try and avoid at all cost.

Nowadays, cars tend to come with alarms pre-installed. However, sometimes these alarms just don’t cut it, and you might want to have a better alarm system installed with different features that make you feel safer about leaving your car parked out on the street.

A car alarm won’t stop the thieves from trying to break into it or stealing things. However, it will alert you as soon as anything dodgy happens, and will also make it a lot more difficult for the thieves to get away with it.

With all the different car alarm systems that are available in the market, you can find different features to suit your different needs, from personalized alarms to GPS tracking so that you know exactly where your car is if it has been stolen.

Some alarm systems even have an ignition kill switch, so that you can ensure the thief doesn’t get away with your car at all!

If you live in a bad neighborhood, or you want to have that added level of security for your car, it is completely worth the investment, as a good alarm system might save you from the distress of losing your vehicle to thieves. 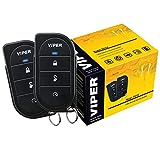 Viper is a brand that offers many different car alarm systems, all of them with a high standard of great quality, well known and favored amongst customers.

The Viper 5706V model is a 2-way car security system that is of an excellent quality, with a range that reaches a whole mile.

It comes with a remote control with which you can control the system through all of the buttons. It has an LCD display screen for easy use, and so that you can keep track of all the controls and settings.

The five buttons on the remote control can be set to control up to 24 different functions, for two separate cars, making this system highly versatile and efficient.

If you are within range, you get automatically notified if anything happens to your car. If out of range, the system notifies you as soon as you reach the car and are in range once more, and tells you exactly what happened through the display screen.

The system is packed with New Technology Platform features, such as an Active Temp Check that lets you know the temperature inside your car. Highly adjustable and easy to use, with a reliable battery that can be recharged using a USB port. 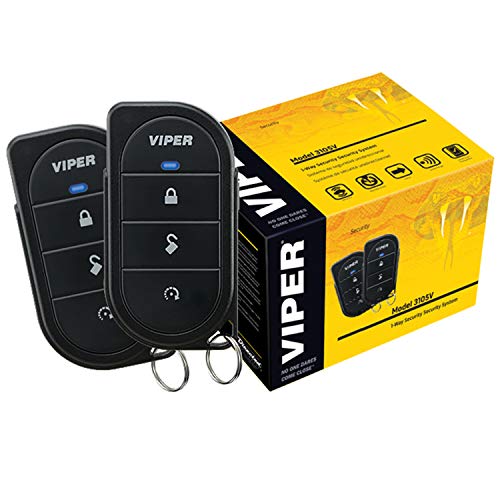 The Viper 350 PLUS 1-way Car Alarm security system is another excellent option by the Viper brand.

Although it has less features, it compensates by being highly budget-friendly, which is a great choice for those looking for something more accessible but still high quality.

The best thing about this product is that it ensures that the thieves don’t get away with your vehicle. It features a FailSafe starter kill as well as an Anti-carjacking and Panic Alarm Feature.

These will deadlock your car so that the thief can’t start it and drive it away!

This car alarm system also features a GPS tracking feature, so that you always know where your car is (something that comes in handy in everyday situations as well as when security is compromised).

The remote comes with four buttons for easy controlling, and is able to alert you the instant something happens to your car.

The shock sensors are adjustable, so that they don’t go off as a false alarm. They’re also great for warning to-be thieves that the car has an advanced alarm system, and that they would do better with staying away! 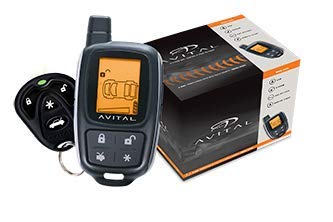 The Avital 5305L Security System is another great choice to keep your car protected with an alarm system that is reliable and efficient.

It comes with a remote control that can command and control the alarm system from up to 1500 feet away. It has four buttons and a large LCD screen with which to monitor the situation, menu and setup.

The two-way system allows for you to receive confirmation that the commands have been executed, and to have full control over what is happening at all times, as long as you are in range.

It has a great number of features that cover all of the security basics, such as a Dual-zone impact sensor, a Fault-proof starter interrupt, Nuisance prevention, and a Warn Away feature to desist thieves from trying to get into the car.

It is also fully compatible with Directed SmartStart. Fully adjustable and able to be customized, alerts included, it is an overall excellent option to keep you notified and in control of the security of your vehicle. 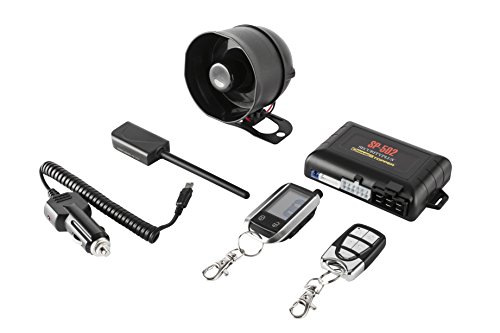 If you’re looking for a highly efficient and well designed product that is guaranteed to stop thieves in their tracks, the CrimeStopper SO-502 2-way alarm system is one of the best options.

The system has a two-way system, with a range of up to 3000 feet. The remote control has five buttons to control all of the features and setups, with a display screen for easier use.

It is also able to work on two different cars simultaneously, making it highly versatile and efficient. It has a remote start built-in, as well as a priority unlock feature.

The remote is completely rechargeable through a USB port, and the system in itself is praised as being highly durable and reliable.

You can track and start your vehicle remotely, as well as preventing it from starting if a thief is trying to steal it.

All doors are also controlled by the remote control, and you can even set up the temperature within the car from a distance.

With this product, you get full control over your car, with a bigger than average range and reliable features. 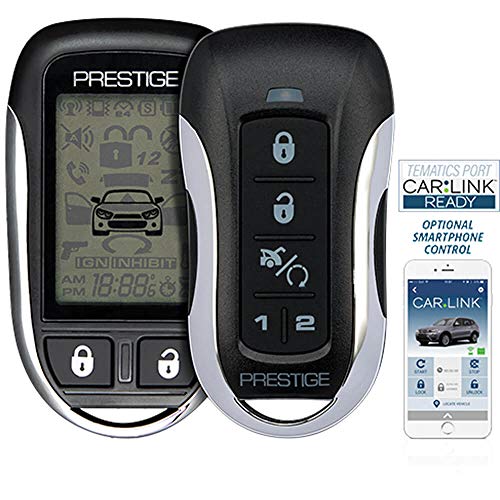 The Prestige APS997Z two-way Alarm system is a good all-round option that covers all of the necessary features to a high standard of quality and reliability.

It has a remote control with 5 buttons and a display screen for easy use, and a range of up to one mile.

The two-way system gives you an enhanced control over your vehicle, and ensures you are alerted if anything goes wrong, as well as allowing you to avoid bad situations with thieves.

It can control multiple vehicles simultaneously, allowing it therefore to be highly versatile and efficient.

A feature that is worth highlighting for this product is that it has a 24 hour start mode, as well as a cold temperature start mode, so that it is always ready to go as soon as you command it remotely.

It comes with a city mode that includes a dual stage shock sensor, so as to avoid any false alarms. It is highly reliable and very simple to use, thanks to the FlashLogic based System Programming.

Unfortunately, a good alarm system is necessary as a general rule, as it is not always safe to leave your vehicle parked out on the street. Although most cars come with an alarm pre-installed, it often covers the bare minimum and doesn’t quite cut it if you’re after a more advanced security system.

The best car alarms will alert you the moment anything happens, but will then also allow you to command your vehicle, even from a distance, to stop the thieves from possibly getting away with it.

There are plenty of options available in today;s market, with these types of products becoming more and more accessible. However, with so many different features on offer, how can you know which one is best suited to your car and your needs?

It’s important to find a car alarm system that covers all of the basics to a high standard of quality, and even more important, the system needs to be highly reliable so that you can rest assured that you will be alerted the moment anything goes wrong.

Having good security on your car can put your mind at rest, and can avoid you from experiencing a bad theft. Before you go out and purchase your car alarm system, it would be useful to get familiarized with all the basic features to look out for, as they can determine how good and efficient a system is.

Range of the Remote control system:

The range of the remote control system determines the maximum distance from which you can command the car alarm system, so it’s quite an important feature to be aware of.

If you’re outside of the range, you won’t be able to command the car whatsoever, and therefore the remote control system won’t be useful until you’re back in range.

Some car alarm systems have a range of up to one mile, which is quite a big distance. However, do you need that big a range? It depends on whether you often leave the car parked far away or not.

If in doubt between two products, it is always a good bonus to get the longer range, as you never know when it might come in handy!

Car alarm systems work through shock sensors, which can sense and monitor movement and impact on your car, and can therefore send an alert that something is happening.

It’s very important to have a good shock sensor, especially if you live in a city, so that the sensors are a lot more accurate. This can also avoid any false alarms, which are rather annoying.

The alarm response is not only the alert you receive on your remote, but the siren that will sound from the car. As a general rule, the louder this siren is, the more probable it is for the thief to get scared and run away.

Some car alarm systems have a one-way system, while others have a two-way system. What is the difference between the two?

A one-way system only allows for the remote to send commands to the car, such as disabling the alarm or remote starting the car.

The two-way system, on the other hand, can send commands to the car but can also receive updates and notifications from the car to the remote, which will be displayed on the display screen.

As a general rule, a two-way system has a lot more benefits and is far more advanced and useful. But if you’re looking for a more simple product, sticking with a one-way system is completely efficient.

What triggers a car alarm?

The main way in which car alarms work is through shock sensors and vibration. This means that the car alarm will get triggered when the sensors pick up impact upon the car, like someone trying to break into your car by attempting to open the door or breaking the window.

However, sometimes car alarms can be oversensitive, and might go off when something bumps into the car slightly, or even if something accidentally falls or bounces off it.

Do car alarm systems drain a lot of car batteries?

This completely depends on the car alarm system, and on the amount of features it has.

If the system is more advanced, it will likely use more battery too.

The usage can also affect the battery, so if the alarm comes into effect and is used, more battery will be drained.

Can I install a car alarm system myself?

However, it is recommended that you seek professional help or advice when installing the car alarm system, so as to avoid accidentally damaging your car, which would then be more expensive to repair.